Round 4, Race 1 of the Praga Cup 2022 at Silverstone saw a debut win for the student-led University racing team after a dramatic one-hour endurance race.

Skilled driving and tactical car management won the race, when a pit stop by the UWR team with a tyre pressure change ensured that Shane Kelly had the best chance to bring his and Stefano Leaney’s No.11 R1 home in first. 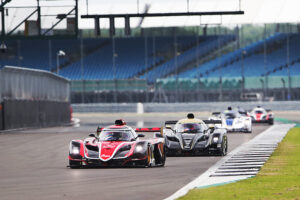 After the race, Stefano Leaney, pro-driver for University of Wolverhampton Racing said: “I’m feeling elated. It means a lot to these people, this is their vocation; they’re learning at university. It’s their future, their livelihood, really, and for them to come into this championship from a complete standing start and to win, you can see it means a lot to them. I’m thankful I can help them achieve it.”

Shane Kelly, am-driver and Team Mentor for University of Wolverhampton Racing, said; “This race meeting has demonstrated the unbelievable work ethic of the student team, who’ve worked day and night for this. Compliments also go to Praga, they’ve helped us out great, as well as the University and the sponsors.”

Gordie Mutch in Fanatec Team Praga87’s ‘Goldie 2.0’ was chosen to receive the Driver of the Day award for completing a near record-breaking fastest lap of the race; just 52.884 seconds.

As the start of the race, pole had been claimed by Championship leaders Scott Mittell and Charles Hall, but their race was over before it begun as they had to retire with only a few laps completed. Having started second on the grid, Leaney fell back to fifth after a hectic opening stint, as cars jostled for position on the short track. With a fast-charging Geordie Mutch making his way up the field in the No.87, the championship looked set to swing back into the favor of the Fanatec Team Praga87 car.

After the opening activity, the No.4 R1 of RAW Motorsports led Mutch, followed by Praga Guest Driver Ben Collins in ‘Everest’, the stunning White and Gold R1. From last, the No.29 Mittell car had jumped up to fourth and was lapping the fastest on track. Mutch had the most pace but couldn’t use it as he was behind the No.4, right under the rear wing. When he did get past, he shot off into the lead building a gap and setting consecutive fastest laps. 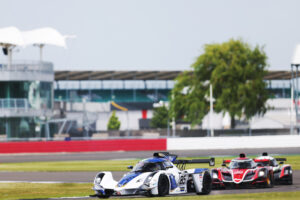 As Mutch made up a gap, it was Collins’ turn to try to find a way to get past the RAW Motorsports’ No.4 and he did so just before the pit window opened, with a sharp move down the inside of Copse. Then, Chris Wesemael made perhaps the move of the race, blasting his R1 around the outside of the RAW Motorsports’ Praga as the pair went through Brooklands.

Mutch stayed out as late as possible after the pitlane window opened, while the University of Wolverhampton Racing team came in early and undercut the RAW Motorsports car. After the stops, the No.87 emerged still in the lead, with Jimmy Broadbent 20 seconds ahead of Jay Morton, who was now at the wheel of the No.85. It looked cut and dry for them until Broadbent had to pull to the side of the track and his hopes of back-to-back wins were dashed.

Now in the lead of the race, Morton had a gap to Dan Gore in the No.29 R1, which was cut to nothing as the safety car was called out to recover Goldie 2.0 and the pack bunched back up. With 15 minutes left, the track went back to green and it looked to be anyone’s race to win. At the restart Morton led from No.’s 4, 11 and 29. Coming out on top was Shane Kelly who produced a lovely dive into Brooklands to take second from Gore. Kelly then closed the gap to Morton, though a miscommunication saw Morton take to the pit and he lost track position to all three cars. 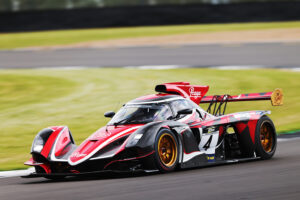 Now in the lead, all Kelly needed to do was manage the gap to Gore. He did so brilliantly, not giving Gore a single sniff at any move and took the chequered flag for the team’s first twin in the Praga Cup: a brilliant achievement for the students who run the car. Gore took an important second which reignites their Championship hopes in the No.29 Mittell Cars R1, while RAW Motorsports consolidated an up and down race with a third place. 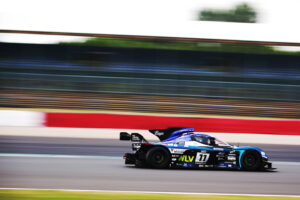 Morton finished fourth for the Praga Team 85 car, and the No.84 Idola helmed by the Bridle twins came home fifth. Despite the issue, Broadbent and Mutch had completed enough laps to be classified for points, along with setting the fastest lap, so still came away in a better championship position than title rivals Mittell Cars. 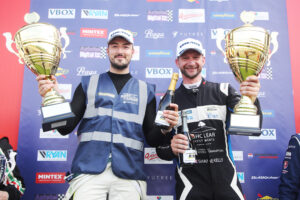 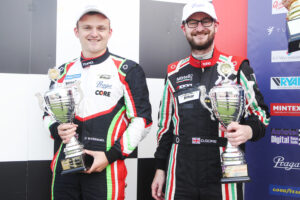 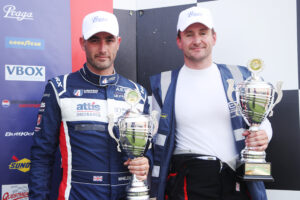