Praga Guest Drivers and sim-stars, Jimmy Broadbent and Gordie Mutch, finished fourth on the back of a race-winning finish to last year’s season.

The start of the race saw pole-sitter Rob Wheldon trade places with Arden’s Tom Canning a couple of times over the course of the opening lap. Further back in the field, Ben Collins had made a storming start, making his way up to fifth overall by the end of the first lap. By the third lap, Collins was up to third getting past Canning who had also been taken by Christopher Wesemael in the same lap.

In the opening minutes of the race Goldie 2.0, helmed by Gordie Mutch, was setting the fastest laps as he climbed the field putting pressure on Canning. At the front, Wesemael continued his attempts to pass Wheldon, all the while keeping a view in his rear mirror for Collins who was right behind.

Inevitably, Wesemael found a way past, diving down the inside of Village to take the lead. Collins then followed the Mittell Praga through and with such a close gap between the top five, Canning dropped a further place, being passed by Mutch, who had found a way past both Canning and Wheldon in a single lap to put his car in the podium places.

The Tim Gray Motorsport-run car of last year’s Champions, Alex Kapadia and Richard Wells had a poor start at the beginning of the race, but Kapadia spent his stint making up for it, setting the fastest lap of the race as he made his way up to sixth. As the pit window opened, he then took the lead as the leaders pitted. Kapadia waited until the very last moment to pit, maximizing his pace and allowing Wells to come out second behind Jimmy Broadbent. Broadbent and Mutch had managed to jump Wesemael and Dan Gore in the pits. Broadbent managed to pull a gap on Wells with each lap, but had to take an extra time-penalty trip through the pits, dropping the No.87 car down the order.

The safety car was then produced to allow Marshalls to recover the stricken UWRacing car which had lost a wheel on the exit of Stowe corner. At the restart, Wells led from Ben Stone in the No.4 car, and Alex Connor in the No.86. He defended through the Maggotts and Becketts complex, but Stone got a great draft down the Wellington straight and dived down the inside of Stowe. Not to be outdone, Connor produced an even more audacious dive to follow Stone through Stowe. Wells, already having a rough lap, then spun dramatically through Abbey, pirouetting three times, before coming to a stop at the edge of the gravel trap. Connor, who was having a great restart, managed to pass Stone for the lead on the exit of Aintree.

The race ended under the safety car, brought out due to Wells’ spin. This meant that it was Alexander Connor and Thomas Canning took the first ever win in the Praga Cup. RAW Motorsports’ Ben Stone and Rob Wheldon finished second, and it wasn’t all bad news for Tim Gray Motorsport, as their No.28 car, helmed by Stefano Leaney and Jack Tomalin, came home third. Despite the spin, Wells managed to bring the car back for a sixth place finish, with Kapadia’s lap time fastest overall.

This result sees Ben Stone and Rob Wheldon topping the first-ever Praga one-make championship table, as Alex Connor and Tom Canning are entered as “invitational”, so do not score points.

Tom Canning, driver, Arden Motorsport, said: “Today was the first time driving the Praga R1 for me and Alex, and it was very nice to get a win on day one.”

Alex Connor, driver, Arden Motorsport, added: “The Praga R1 is fun to drive, and so is the Silverstone Grand Prix circuit, so it’s a good combination. After today we have a one hundred percent win rate, so the goal for tomorrow is to keep it that way.”

Ben Stone, driver, RAW Motorsports: “It feels fantastic to get a podium first time out in a Praga. Rob did a great drive at the beginning but had a few tyre issues and was overtaken by three cars. After the pitstop, a few cars spun off, leaving us to finish in second, beaten by the two pros.” When asked what his plan was for tomorrow, he simply said; “Win.”

Stefano Leaney, driver, Tim Gray Motorsport: “The race was mega, as to be expected. It was hectic in the first few laps, I had a good pace at the start due to the tyre pressure being high, but it did mean that the tyres dropped off at the end. Then Jack went in and brought it home to the finish, lifting the team spirit, and we’re confident ahead of tomorrow.”

To watch the race in full, visit the BARC YouTube channel. 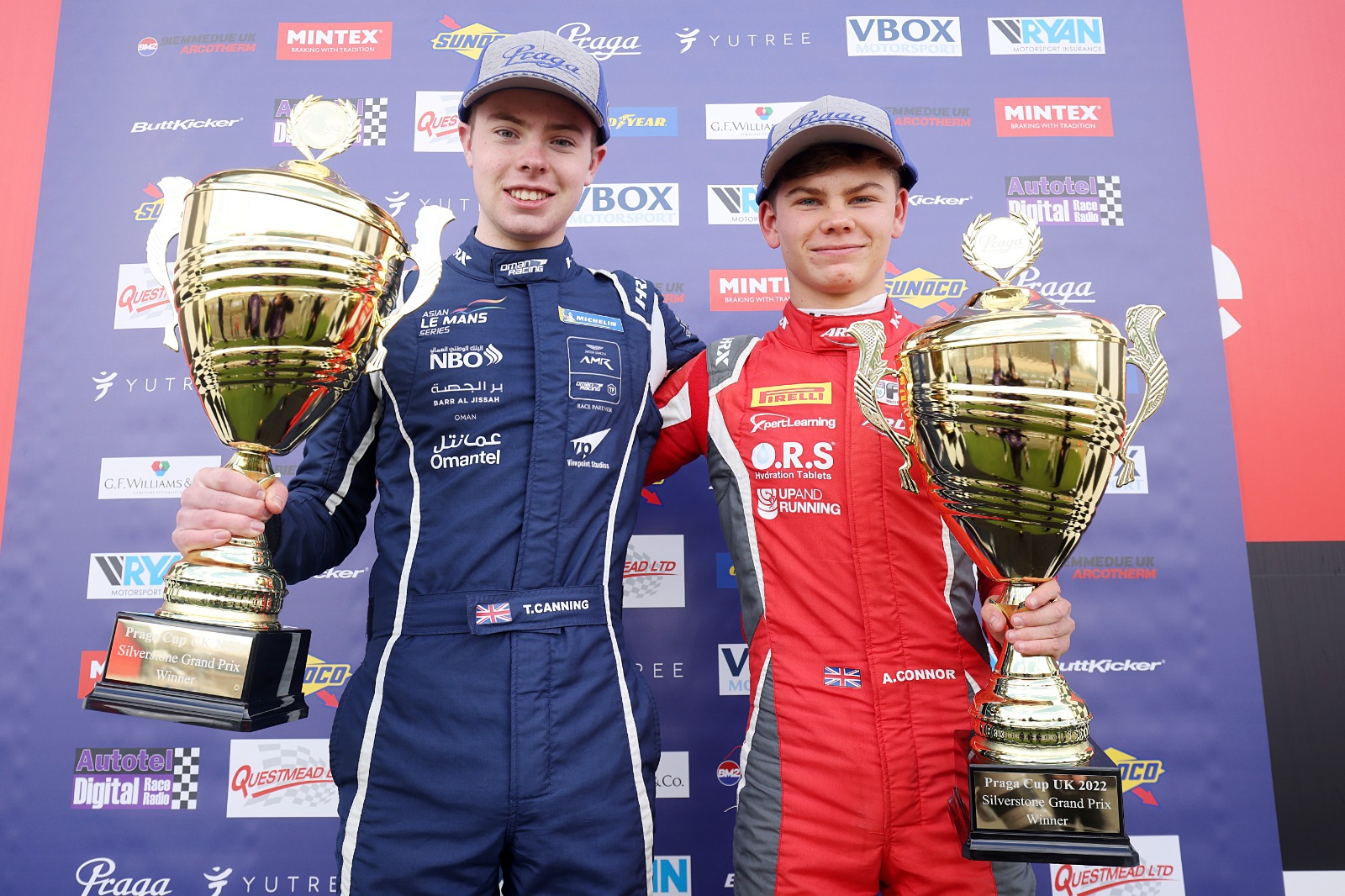 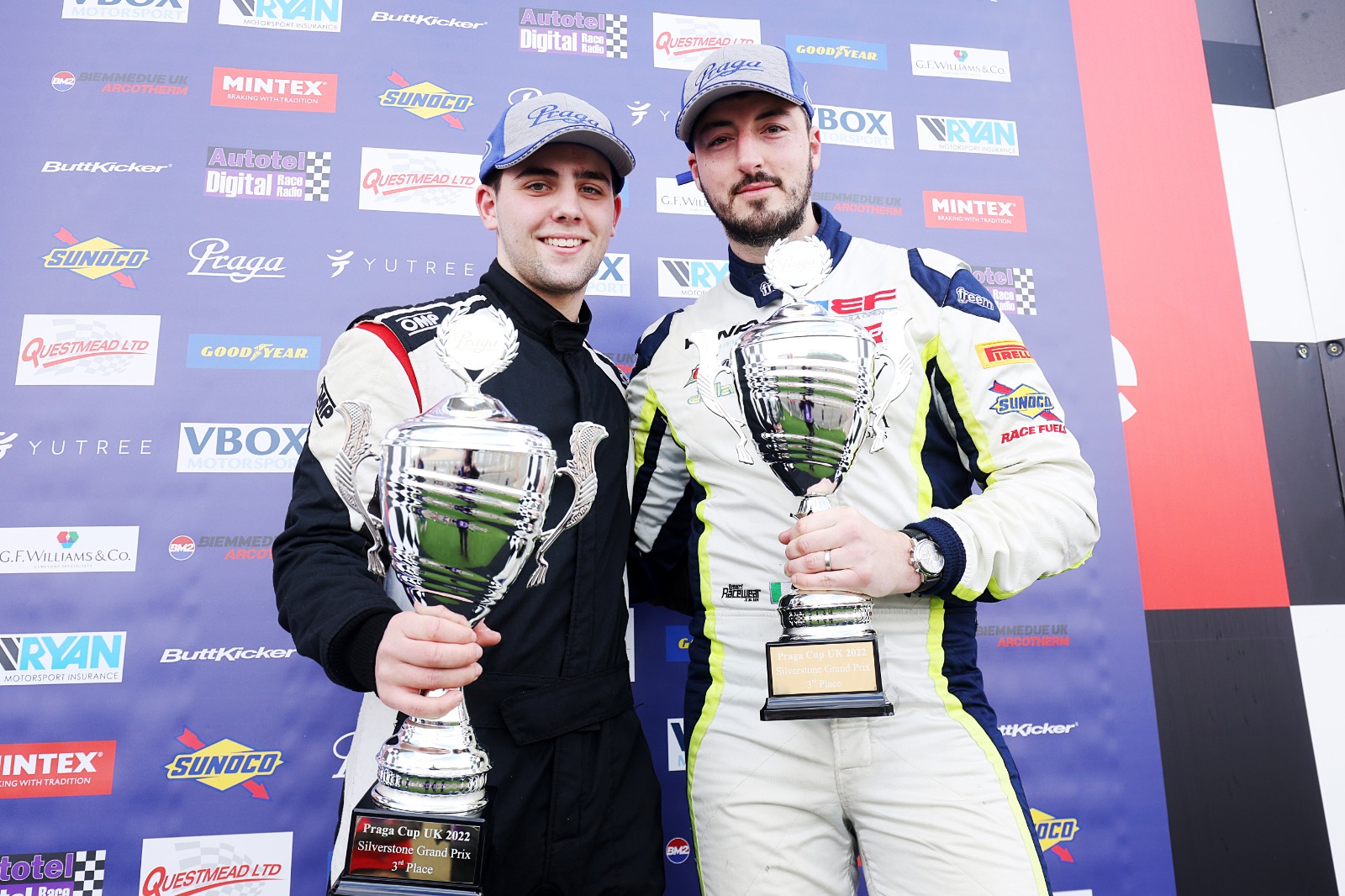 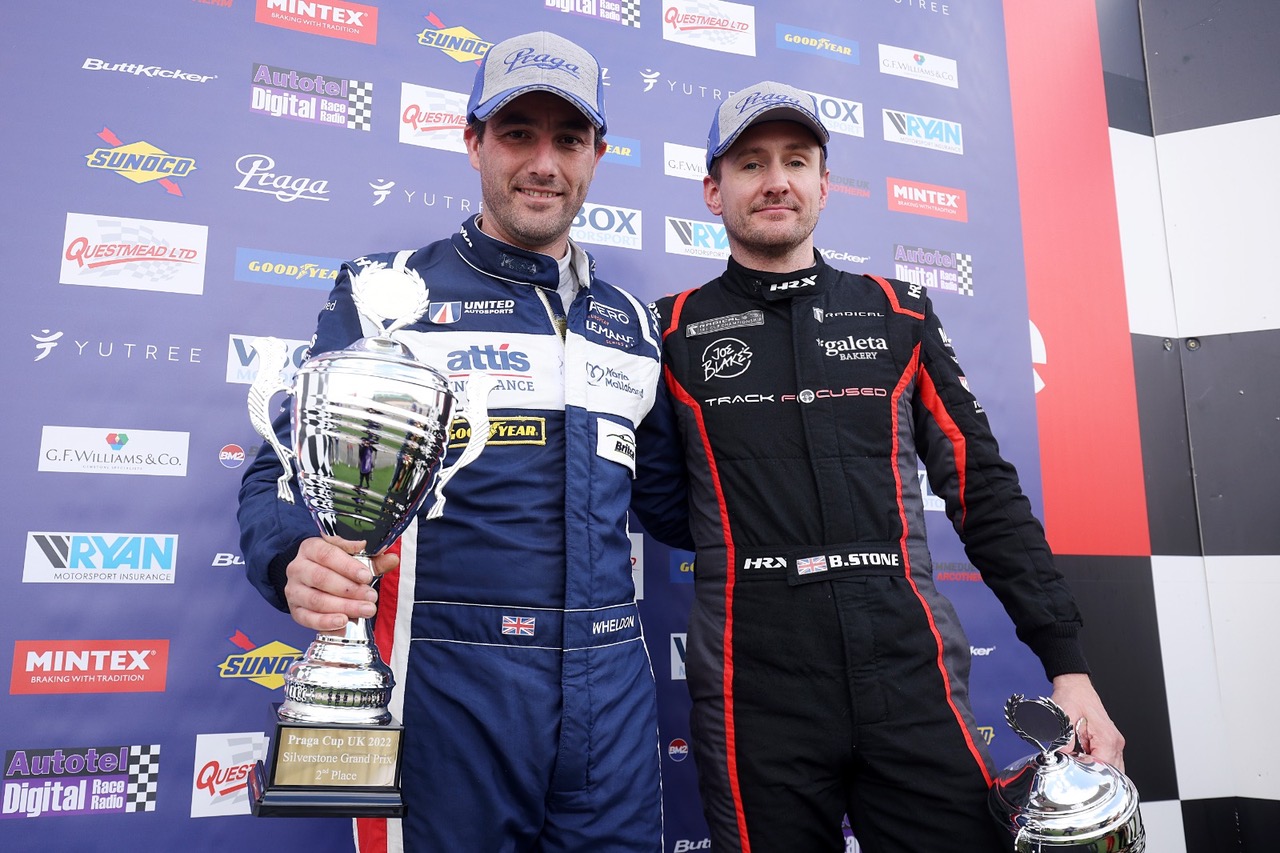